Last January, NINET-IMH team sent out a survey to the clinic patients asking about their opinions on making rTMS publicly funded in BC, as well as to share their experiences receiving rTMS treatments.In the hopes of reinforcing the lab’s application of nominating rTMS to the BC Health Technology Assessment Committee (HTAC) for provincial rTMS funding.

If the committee chooses to review rTMS as a treatment for depression and makes a favourable recommendation to the Ministry of Health, it would be a crucial step forward in providing free rTMS treatments to those in need across the province.

Of the 38 responses we received, 100% of the respondents thought rTMS should receive public funding in BC. 36 respondents found rTMS to have made a significant difference in their lives, but two didn’t. Finally, over half of the respondents said they could not afford to pay at least $500 for a full course of rTMS treatments. 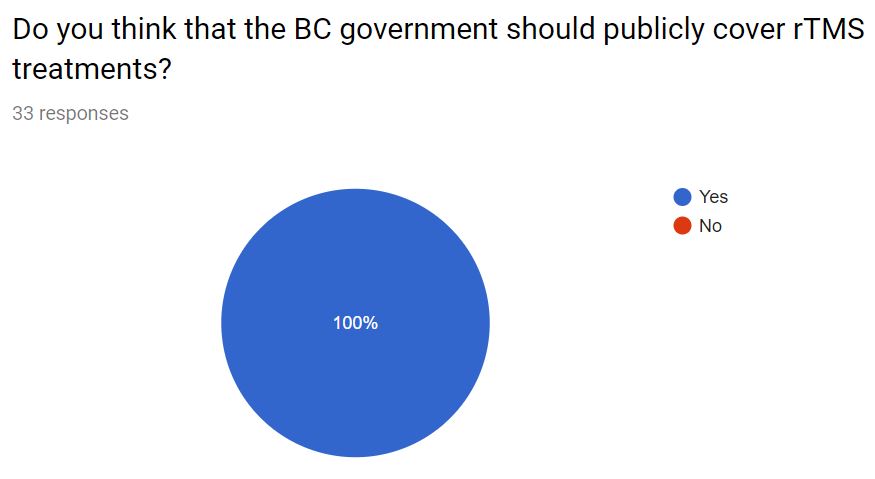 25 respondents elaborated on their responses to this question. A frequent point in the answers was that the economic burden from providing treatment would be less than that of treatment-resistant depression.

“As a cost measure, it could also save the government money in medication, hospital visits, missed time at work and the social cost of families in distress,” wrote one respondent.

Others elaborated on the effectiveness of the treatment, citing both personal experiences and numerous research studies showing rTMS to be effective in reducing symptoms of treatment-resistant depression.

One respondent wrote: “I’ve had drug resistant depression for most of my life. rTMS has been the only treatment I have ever had where I experienced results.”

Others centred around accessibility and affordability of the treatment. One respondent wrote they travel over two hours to get to UBC, noting that if the practice were more readily available it would “significantly improve [their] quality of life during treatments.”

22 chose to elaborate their responses to this question. All except one wrote on the significant improvements they felt after receiving rTMS.

One respondent wrote they hadn’t yet received treatment, and so couldn’t comment on the question.

Of the 38 responses we received for this question, 20 responded they could not afford at least $500 for a full course of treatment, and none were able to pay $3,000 for treatment.

While the NINET-IMH Clinic offers the only free rTMS treatment in the Lower Mainland, an rTMS treatment course in private BC clinics can range between $3,000 to $5,000. This would be unaffordable for all who answered this question.

Finally, we asked respondents for anything else they’d like to share. 21 respondents wrote in, many writing words of thanks. Others slammed BC for falling behind other provinces in providing public rTMS funding.

“We are falling behind other provinces who provide public funding for rTMS (Alberta, Manitoba, Saskatchewan). Why is it that BC doesn’t fund universal healthcare the same as other provinces? There should be a national standard,” wrote one respondent, elaborating that they’ve “met people who have to couch surf for weeks at a time in Vancouver 100’s of kms from home in order to get treatment at UBC.”

“If there was government funding, I could see more hospitals or clinics offering rTMS to the 30 or 40% of people with major depression who are not helped by prescription drugs,” reads one response.